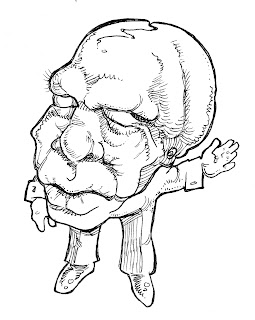 Here is a draft of the first page of the novel that I am working on:

"Zingot, one of the sleepers is wondering about us . . . thinking beyond a dream. He is curious as a cat and I suppose that he may visit us tonight. Let us prepare to greet him, shall we?"

The voice that spoke was deep and threatening, which betrayed the hospitable verbiage. However, all of the proper grammar was lost on Zingot, who did as little thinking as possible. But Zingot did get the gist of the message and rolled away ringing his hand bell and dripping ice cream in the corridor as he went. As he did so, rats in crisp red tunics came out of tiny doors in the baseboard and cleaned the ice cream off of the floor and then just as swiftly disappeared again - leaving no trace.

The Head took no notice of the ice cream, the bell ringing, or the rats. He was pensive. With eyes closed, his massive and distorted head and tiny body shuffled slowly back to his chambers.

The Head was just that, an immense head with little legs and arms that extended beneath him. His body was completely hidden by his chin and jaw. The Head always wore a suit - either black or pinstripe gray - with black patent leather shoes. His shirts were always plain white but all you could see were the cuffs. Presumably, he wore a black tie but that was hidden deep beneath the fleshy recesses of his neck. His skin was normally a pallid gray-green. However, he had a chameleon-like ability to change his flesh color. The Head was bald, with the exception of an odd stub of hair now and then, as though a mostly bald man had been caught in a fire and had his few remaining hairs seared off. His eyebrows were a little fuller but still mangy.

At the top of his head was a prominent and disconcerting fissure, which ran across the center from front to back. The fissure appeared old and weathered, as did the whole head, with many lines, cracks and scars - like an ancient whale that had won numerous battles with whaling ships. The shape of the skull under the skin was easily recognizable and were it not for the fleshy eyelids, lips and bulbous nose, his head might easily be mistaken for a skull. Particularly since The Head had only holes where his ears should have been. Oddly, his hearing was quite acute.

* * *
Zingot rolled around a corner into another older corridor, the ice cream cone was gone but the evidence still could be seen on his hands and face. Zingot did not mind the stickiness or the pink, for it had been strawberry - his favorite - and it just made him appear sillier than normal, if that were possible.

Zingot's head was cone shaped with the pointed end up. He had two tufts of bright orange hair sticking up above each ear. His ears were large and pointy. His eyes were black and beady, and were always crossed, so that you could never be sure where he was looking or whether or not he was focused on anything at all. He never stopped grinning but he did not exactly look happy. He wore a one-piece purple suit with a puffy yellow collar that went around his neck like a donut. Down the front of his suit were three large yellow buttons. Where his feet should have been, there were smooth red rubber tires with bright yellow hubs. In his left hand, he frequently carried a brass hand bell, which he rang incessantly as he rolled madly through the corridors of The Head's Governor Mansion.

With sticky pink face and hands, Zingot reached the scriptorium in the deepest level beneath the mansion, crashing and ringing through its chamber doors.

Seething with anger from the dark shadows, the hooded scribe gnashed his teeth, "Quiet, you noisy fool!"

Zingot took no notice of the vicious tones but rather was distracted from his bell ringing by the flickering candles, incense and general air of mystery in those austere and dank rooms. Even the red-tuniced rats did not enter there.

"Why are you here, you idiot?" Kreen, a Skolex scribe, spit the words at Zingot as he spoke.

Barely remembering The Head's orders, Zingot began babbling in his squeaky voice about preparations, papers and solemn contracts. At least that was what Kreen unscrambled from Zingot's ramblings.

“Yes. This is what we have been waiting for.” Skolex hissed. “We will be ready.”

Zingot nodded his head vigorously. Though without the least understanding – he was simply caught up in the drama of something new.

A few of my family and friends have expressed an interest in the novel that I am working on. So, here are the first three pages.