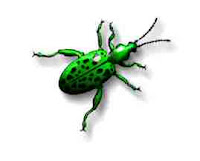 By way of receiving two books for Christmas, I have two books to recommend to your reading: One of these books is a collection of brilliant photographs of insects, (some of whom look like friends of mine). The book is titled Exquisite Creatures - the Insect Art of Christopher Marley by Pomegranate Press, San Francisco (2005). Each print is an over sized postcard on heavy glossy stock. However, I suspect you will be more likely to want to frame them, rather than mail them. Besides the fact that each of the insects is a beautiful example of God's creative handiwork, Marley presents many of them in a mosaic arrangement that serves well to emphasize their iridescent colors and smooth forms. (By the way, the bug above is not one of Marley's. That bug belongs to Corel photo-tubes. Thanks, Corel). The second book is Daydreams and Nightmares - the Fantastic Vision of Winsor McCay, edited by Richard Marschall and published by Fantagraphics Books (1988). I thought that I was fairly familiar with Winsor McCay's artwork, until I read this book. I have read quite a lot of Little Nemo in Slumberland and Dreams of a Rarebit Fiend but Daydreams and Nightmares presents a much wider sampling of McCay's work in chronological order. Also, Marschall does a fine job of presenting a brief biography of McCay's life. The book's most fascinating pages are those that present McCay's larger editorial and visionary drawings, which include visions of the future and graphic commentary about the times in which he lived - some of them are rather prophetic.

Posted by Veemack at 6:22 PM No comments: 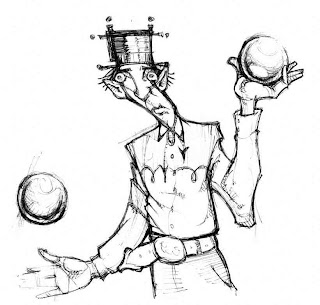 This whimsical sketch was simply a doodle; drawn while the artist was responding to a phone survey that promised to be short but in reality went on for quite some time - as evidenced by the detail of the drawing. Vee Mack is working on a color version of this same drawing.
Posted by Veemack at 11:31 PM No comments: 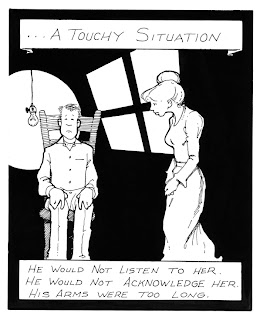 What does an artist do after he spends a couple of hours putting a drawing together and then discovers that he goofed up? In this case, the cartoonist (Vee Mack) used the mistake as the focus of the comic. However, the mistake was only obvious to the artist. So the enigmatic tension that he created - while amusing to him - was lost to most everyone else who saw it. What is the mistake? If you sit down in a chair with your back straight and your elbows up against your waist, your hands can't possibly extend over your knees, unless you are a gibbon! Therefore, the oddity in the drawing was used to indicate to the viewer that the seated figure was so humiliated by his long arms that he was unwilling to speak to anyone and so retired to the attic in silence.

Vee Mack, (who retired from drawing comics before more than only a very few were published), delighted in drawing the comic first and then afterwards deciding what the caption would be. In this case he fell short of the mark. As we know: a joke is not funny, if you have to explain it. However, Mack persisted in the idea that the artwork of the comic ought to take precedence over the caption/punchline. If the graphic itself was intriguing and amusing; it did not matter to Mack whether or not the caption was amusing. I suppose this is sort of a silent movie approach to drawing comics. Have any comics been able to survive using this philosophy?
Posted by Veemack at 6:52 PM No comments: 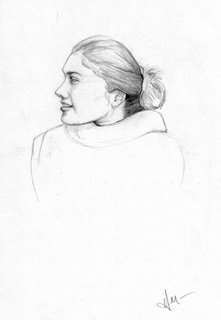 At the Art Institute of Chicago there is a small drawing that one could easily miss on a wall that is unusually crowded in the modern art section of the Institute. It is a pencil drawing of a young face, by Salvador Dali. Around the periphery, the face has an indistinct blurred cast, which gives the face the appearance that it is emerging out of fog. However, one eye is amazingly distinct and sketched with such clarity, that I am immediately riveted by it every time I see it. That sketch is one of the pieces at the Art Institute that I return to see as often as I can - and yet it is not one that appears in the "Essential Guide."

I mention that sketch by Salvador Dali because this drawing by Haley McCalister has some of that same quality of both softness and clarity that I admire so much in a well-rendered pencil drawing. Unfortunately, the scan of the sketch "hardened" the drawing. The original is even more appealing and demonstrates a fine balance of tone, line and contrast.
Posted by Veemack at 8:37 PM No comments: