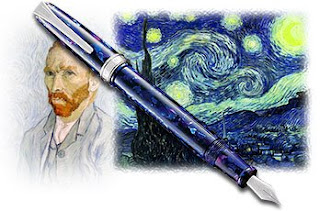 Obviously, I am in a rut since here I am posting another True Writer review. Trust me, I have never even met Steve Leveen!

And let's face it, this is not much of a review because the True Writers all write the same - that's why I keep buying them!

The Starry Night is one of those pens that is just beautiful to look at and I think Levenger did a nice job of capturing the feel of Van Gogh's painting, with one exception: the punctuation of yellow is absent. The stars are not there. The range of blue is striking but it should have had a slight splattering of yellow to really capture the Starry Night motiff. Even so, I am glad I got it. This is my first multi-color resin pen from Levenger and I am pleased with the weight and depth of color. It has more presence than the demonstrators and solid color pens but not as heavy as the Medalist.
Posted by Veemack at 6:21 PM 4 comments:

I failed trigonometry in college. But while I was taking notes I made a doodle in the margins that later became this painting. (Just for the record: I missed the first class session where the students were told that they could not use a calculator. Besides, I had just spent $75 on an advanced calculator and I was determined to use it! I could not imagine a scenario where anyone would not take advantage of a calculator if they could. However, my professor did not see it that way. He was about 70 years old in 1977 and he could not imagine anyone using a calculator. His opinion won out on the registrar's report.)

While I was interested in algorithms to a point, I was more interested in the experiment of combining abstract concepts with surrealism. The "Obelisk and the Angel" was one of those experiments. The obelisk and the face of the angel were rendered in an abstract form, while the remainder was rendered in a surrealistic form. The doodle was originally drawn with a blue ball point pen, the look of which is retained in the image of the obelisk. The hand is threatening to keep the angel from ascending beyond the height of the obelisk. The profundity of which escapes me for the moment. Any Freudian suggestions?

The "Obelisk and Angel" was painted on canvas with oils.
Posted by Veemack at 10:09 PM 1 comment:


Originally I wasn't too excited about Levenger fountain pens because they appeared to be an uninteresting design and made of light weight materials, which I mistakenly equated with poor quality. As I have written previously, I have since purchased several True Writers and they have become my favorite fountain pens because of their reliability, comfort, line quality, ink colors and I have even come to really like the simple styling and light weight.

However, I recently discovered on eBay that Levenger has an outlet store with some great deals. There I found a pearl Truewriter Medalist at less than half of the new price. The Medalist has all of the writing qualities of the other True Writers - including interchangable nibs, like Pelikans - plus it has the heft of a brass barrel pen like the Cross ATF. Actually, it is heavier than the Cross.

The pearl finish looks much better in person than it does in the photo. It is an irradescent white, not the least bit silver, as in the photo.
Posted by Veemack at 1:05 PM No comments: