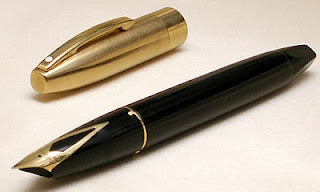 Yes, I know. I took the easy route and used stock photos for my unbiased review of the most awesome Sheaffer Legacy 1 fountain pen. But my camera almost always disappoints me when doing close up photos. And then I find myself with lousy photos and no time to write a review.

FIRST IMPRESSIONS. If ever there was a pen that would compel me to say, "Okay, that's it I'm done. I never need to buy another fountain pen ever again." The Sheaffer Legacy is that pen . . . except for the Pilot 823 . . . and the Waterman Carene . . .and . . . well at least the Legacy is such a great pen that it was longer than usual before I got another fountain pen. (By the way, the 823 review is coming soon.) 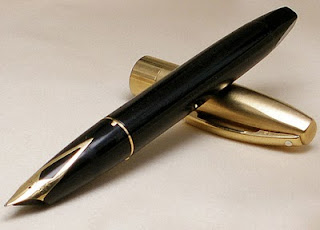 I'll be honest, I don't care for the color gold, real or plated - in fact I really dislike it. But I had read so many good comments about PFMs and Legacys, that when I saw the price: too good to be believed at Peyton Steet Pens, I said "Gold, shmold" and ordered one. When it arrived, I still didn't care that it was gold. The 1995 NOS Legacy 1 arrived just as advertised - just as if straight from the factory - perfect.
DESIGN and CONSTRUCTION. The first thing that you notice is the impressive girth and weight of the pen. The barrel is a half inch in diameter but it feels thicker. And, from end to nib it is only 4 3/4" which I would usually disdain as too short but it doesn't feel that way at all. With the cap posted it is a full 5 7/8". The cap is wide and light weight so it stays well balanced with the cap posted. The barrel has a high gloss black lacquer (over brass?) with a deep shine.
NIB. The Legacy has an 18ct gold inlaid medium nib. Though this pen was made in 1995, the inlaid nib makes it look as if it were designed in the 1920s. The common everyday nibs that stick out of the bottom of a pen lose their appeal once you've seen an inlaid nib. Not only is the nib stunning in appearance but it writes velvet smooth with a wet, even flow. The Legacy has a reputation for being a very wet writer and this one followed suit. It is an absolute joy to write with. 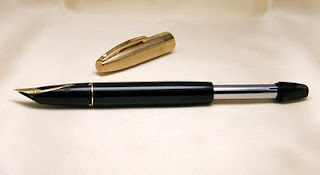 FILLING SYSTEM. Sheaffer utilized the touchdown filling system in the Legacy, which creates a suction when filling the pen and provides a very satisfying woosh sound when the pen is filled. It also seems to hold a higher capacity than a converter, which is handy for such a wet writer. I've read some complain about the shape of the blind cap at the end, but it gets the job done and makes the pen look more interesting than a simple cigar shape. There are a lot of C/C fillers out that have a faux blind cap. It is great to have the real thing!
CAP and CLIP. I'm sure the cap is marvelous for those of you who like the color gold. It doesn't do much for me. The clip is the only average part of this pen. It gets the job done. However, I do appreciate how well the shape of the cap corresponds to the rest of the pen. The top of the cap tapers to a square, just as does the blind cap at the end of the barrel. The cap is light and snaps securely onto the pen. And it clearly does a good job of capping the nib, because it never dries out. I also, prefer snap on caps over screw on caps - quicker to remove, and the cap doesn't inadvertently unscrew in you breast pocket.

CONCLUSION. Apart from the average clip - but nothing wrong with it - everything about this pen is outstanding in design and performance. After using this pen, it isn't as easy too get excited about pens with standard nibs and standard filling systems.
Posted by Vanrensalier at 12:21 AM

Hey, if you ever get tired of this pen, I accept hand-me-downs! It's truly a great looking pen. Thanks for reviewing it. I hope the Pilot 823 review is coming soon.

I know I promised the 823 review ages ago. But these reviews take me an hour or two to write and that's precious time!

I have Sheaffer Imperials which are the cartridge filled version of your pen. They have plastic caps with the plated cap band. CP or GP. Do not fill your wet writers with P. R. Tanzanite!
My black desk pen uses the same filler as your Legacy, but has the a lovely GP nib. Both are great pens. Lightweight plastic barrels make these guys a breeze to use.

Lightspirit - Thanks for your advice! I don't have Tanzanite but have almost purchased it a couple of times. You're right; my Legacy is a very wet writer. Do you think Tanzanite would be a good ink for a pen that writes a bit dry?

I'm sorry I didn't see your question sooner. This Legacy is no longer in production. So, it might be difficult to find at any price. It is possibly my favorite pen out of the 50+ pens that I own. So, worth paying for.