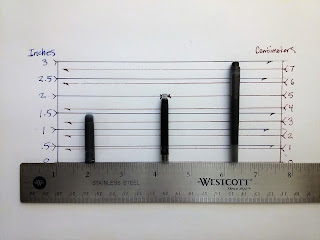 Most of my fountain pens are filled from bottles of ink.  However, when I am away from home or office and not certain my pen will last through the day without a refill, I use a pen with a cartridge. Ideally, that will be a Waterman long international, which fits in my Waterman Carene, Levenger Truewriter and Jinhao 159/x750, among others. Most pens that will hold a long international cartridge will also hold two shorts - one installed and one in reserve. Frustratingly, this is not always the case.

What drives me crazy is the number of pens that are only a few millimeters shy of holding two shorts or a long international cartridge! Dear fountain pen makers: Does it never occur to you to test that before you put them into production? Way back when I first began collecting fountain pens, I was impressed by how smart that was that you could always have a spare cartridge in reserve inside your pen. But the more pens I collected the more I was surprised that was not the case. That irritation faded into the background the more I used piston-fillers, pneumatics, bladders, capillaries and converters. 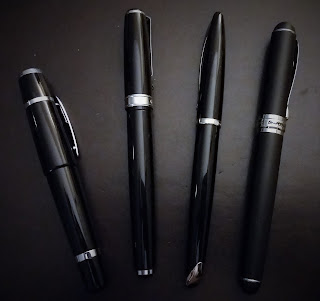 One of my favorite pens - a Taccia Portuguese is about the length of a pocket pen and writes perfectly, never drying or clogging, and no false starts. That makes it a perfect candidate for carrying around all day.  Except that it is too short for an average length converter. One short international converter is all that it will hold. Until now I have used a plunger style micro-converter, which probably holds less ink than even an international short cartridge. And since the Portuguese is a wet writer, it doesn't write long before needing a refill. The metal band at the bottom of the body prevents it from being converted to an eyedropper fill. So, it has always stayed home in spite of its portability. Until today, when an order from China arrived that I had forgotten about: 5 packages of JinHao cartridges (25 cartridges) for less than three dollars and FREE shipping!  The price was great, but even greater was the realization that they were medium length cartridges - a length between short and long international cartridges. This is a cartridge volume that appears to compare to that of proprietary cartridges like those of Lamy and Pilot. Unfortunately, I don't know the actual volume by comparison. But really, I don't care - I'm just thrilled to have an international cartridge that will last longer in those pens too short for long cartridges. Especially, my Taccia Portuguese, which can now become the awesome pocket pen it always was meant to be. 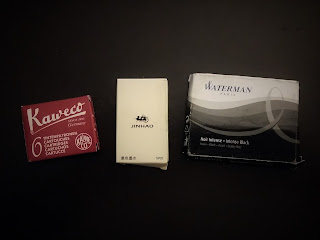 Posted by Vanrensalier at 5:05 PM