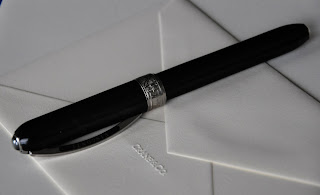 First Impressions. [10/10] The very first impression was “This is a high quality pen and altogether different than any other pen I've owned.” This Visconti Rembrandt is made out of black resin with a slight hint of very dark silver veins. On this pen the veins are nothing as distinct as the photograph that I saw online. At first I was disappointed by that but over time have grown to love the subtlety. It doesn't jump out at you the way some bright and bold resin mixes do. Instead it conveys the serious chiaroscuro that the Visconti's designers envisioned. While the pen is very ingenious and modern in the way the pen is designed to function, it communicates a centuries old impression – as it was clearly intended to do. As an amateur student of art who has studied Rembrandt's paintings in person, I am amazed at how well this pen captures the atmosphere of Rembrandt. I know it sounds trite, but it looks like the kind of pen he would have used, had there been such a thing. However, I have also seen the blue Visconti Rembrandt in person and did not find that to be true with that pen. The blue version did not communicate the bold chiaroscuro that Rembrandt is known for, nor did it have that old-but-new appearance.
Dimensions. [9/10] Classic cigar-shaped pen with many interesting nuances.
Capped: 5 1/2” or 14.1mm
Posted: 6 7/16” or 16mm
Uncapped: 4 15/16” or 12.5mm
Diameter: 1/2” or 13cm
Quality. [10/10] The quality of this pen is impressive in every detail. The resin is lustrous and not easily scratched. The threads between the body and nib section are metal to metal. (Leaving you without the concern that metal on resin may eventually wear out or cross-thread.) The button and end caps are metal and well fitted. The band on the cap is beautifully detailed and deep. (It is nothing like the shallow laser engraving that one occasionally sees.) It is very comfortable to use and pleasing to the eye. 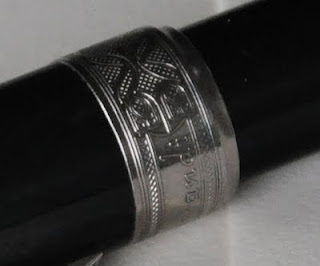 Cap. [10/10] Usually, the cap of a pen is the part I am the least interested in. So long as it looks good and does what it is supposed to do, I am pleased. However, the Rembrandt's cap is simply amazing at a number of levels. The engraved band is strikingly handsome, with an antiqued look to the silver. The magnetic closure is fun and functional. I'd remembered that being the only feature of the blue Rembrandt that I had seen in a local store that I liked, but it wasn't enough to get me to buy it. But now that I've had the black Rembrandt for a couple of months, I think it is tremendous. I use my fountain pens at work throughout the day, but get weary of constantly unscrewing the cap. The magnetic cap seats firmly over the nib, so there's no concern about it coming loose in your pocket, and pulling the cap on and off throughout the day is a joy rather than a chore. Putting the cap back on the pen is actually distractingly fun (I'm easily amused) because you just get the cap close to being closed and the magnet pulls the cap on the rest of the way by itself. Also, the cap seats well enough that the nib doesn't dry out quickly: another plus. As if that weren't enough, the cap has a magnet built into its top button also. When I purchased this, I didn't care the least bit about the Visconti "My Pen System” - I knew I'd never use it. However, the dealer threw in my initials for free – I guess because I'm a regular customer, or because he is such a nice guy, or both! The Visconti My Pen System allows you to customize the top button of your pen. Using a magnet you can pull out the standard Visconti logo and replace it with your initials, symbol, or stone. As much as I liked having my initials in the pen, they left the top of the pen very flat, which opposes the symmetry of the pen – in my mind. The end cap at the bottom of the pen is a simple chrome nipple, which looks great on a classic cigar-shaped pen. The fact that the top of the cap didn't match the bottom of the barrel got on my nerves – I needed symmetry! So, I ordered a hematite stone to fit into the top of the cap. It came today. The pen is finally symmetrical. It looks great. I couldn't be more pleased.
Clip. [9/10] The clip is great, too! I'd seen photos of Visconti clips and didn't really care for them: they appeared to stick out too far. In reality, they do not. The bow of the clip is not as dramatic in person as at first appearance. And, the fact that it is spring-hinged is another classy and functional touch. Even the printing of “Visconti” on the side is accomplished artfully. 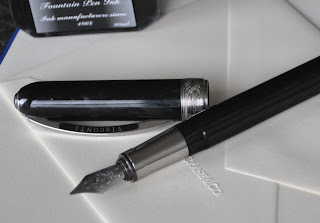 Fill. [5/10] This is the one and only feature where the pen does not excel. It uses a cartridge or converter. The converter is of sufficient quality and fits snugly into the feed. Nothing to complain about, but nothing to get excited about either. That being said, having a converter that fits securely is valuable.
Nib. [8/10] I have read critiques about Visconti steel nibs being too firm. And this nib (a fine) is fairly rigid, but not as rigid as a Cross or Waterman nib. It is extremely smooth and medium wet (6/10), and writes well with very little feed back. I am using Diamine Twilight ink and getting a very consistent medium-fine line without skipping.
Conclusions.  I enjoy this pen the more that I use it.  And now I'm thinking that I will order more stones for the pen system in different colors to indicate the color of ink in the pen.  Well, maybe I'm getting carried away.

Addendum [May 1, 2013] - I recently purchased the Rembrandt calligraphy set with two italics nibs  (0.5 and 1.5).  It also comes with two converters, so that you can switch back and forth between the two nib sizes. I enjoy the 0.5 nib so much, that I am using it for my daily writing pen.  This set is currently on sale and is well worth the $150 price tag.  The calligraphy pen is lighter than the regular Rembrandt because the nib section is plastic rather than steel. Other than that they are identical.

Posted by Vanrensalier at 8:16 PM

What a beautiful pen... and great review!!! I have an Opera Series, which, I think, it is sort of the common, run of the mill Visconti... but it was a present from a student and to me it is the greatest pen in the world. :-D

Thank you! This is the only Visconti I've ever used, but it seems as though quality control and high standards are very important to them. You must be a remarkable teacher to have earned such a remarkable gift.