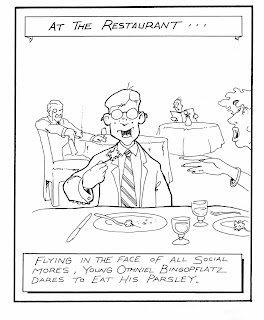 The question that now begs to be is answered is... why?

Must be one of those OD types I learned about over at the pub.

"Parsley (Petroselinum crispum) is a bright green, biennial herb, also used as spice. It is very common in Middle Eastern, European, and American cooking. Parsley is used for its leaf in much the same way as coriander (which is also known as Chinese parsley or cilantro), although it has a milder flavor. Two forms of parsley are used as herbs: curly leaf and Italian, or flat leaf (P. neapolitanum). Curly leaf parsley is often used as a garnish. Many people think flat leaf parsley has a stronger flavor, and this opinion is backed by chemical analysis which finds much higher levels of essential oil in the flat-leaved cultivars."

I interpret that as "parsley is really yummy."

By the way Anonymous, note this:

"Parsley should not be consumed by pregnant women. Parsley as an oil, root, leaf, or seed could lead to uterine stimulation and preterm labor."